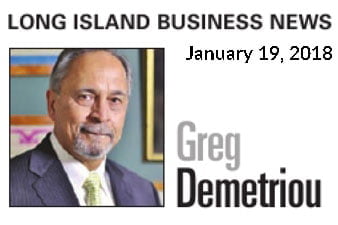 Heroin Crisis is Touching Every Aspect of LI Life

Several years ago, there was a running anecdote that everyone was separated from the actor Kevin Bacon by six degrees of connection to other people. It lingered for quite a while and eventually morphed into six degrees of separation for almost anyone to anyone.

Sadly, the heroin and opioid crisis does not subscribe to that many levels before it hits all of us.

Every single person I speak with knows someone or has loved ones who suffered a tragic death by overdose. Celebrities, executives, politicians, skilled and unskilled workers, moms and dads, grandparents, brothers, sisters and cousins are not immune to the unfortunate overdoses and deaths brought about by the poison now being sold as heroin.

So many stories tear at the hearts of individuals and families.  A Grandparent loses a 20-something grandchild, a father finds his son dead of an overdose from his very first use of heroin, best friends are burying each other. Each story is unique, but each are founded in a crisis of epic proportions.

Nassau and Suffolk counties are at the top of the list of geographical areas suffering the most.  As reported in Newsday, 2016 saw 539 deaths due to opioids, primarily heroin, that contained the killer fentanyl. Total opioid deaths have increased by two and one-half times since 2010.

The problem has been building but had not gained the attention of main street until fairly recently.  Now that it has there is a growing consciousness in the greater community of the absolute need to create a strategy to combat the crisis. Long Island cannot afford to lose so many of our young people and jeopardize our future.

Some of the people I have meet that are leading the charge are Suffolk County Police Commissioner and District Attorney Tim Sini, Dr. Jerry Reynolds of Family and Children’s Asso-ciation, and David Okorn of the Long Island Community Foundation. In addition, there’s Drew Scott, recently retired veteran reporter and anchor at News 12, who lost his 20 year old granddaughter, and William Reitzig who started Hope Walk for Addiction in memory of his adult son, Billy. They are just a few of those I have meet, I am sure there are so many more who want to stem the tide of these preventable deaths.

Our actions must reach across all social, economic, political, ethnic and religious groups, organizations and individuals so that we act in a unified effort that will be greater than the sum of the parts. If we can create a reality based plan and execute according to our expertise, financial ability and energy, many lives can be saved.

Think globally and act locally actually applies to the heroin death crisis because of the additive, fentanyl. It is generally accepted that manufacturing or fentanyl is done in China and Asia and transported via Mexico into the United States. There needs to be a political approach which will be difficult, but not impossible, in the midst of political strife. However, push we must to demand that those responsible for creating this poison are found and brought to justice.  They are literally murdering hundreds and thousands across the globe.

The heroin of old was meek by comparison. Today it is laced with the deadly drug fentanyl.  More than a few granules can cause an instant overdose following quickly by death. The overdose antidote, Narcan, which is carried and administered by first responders and EMTs, can be ineffective in extreme cases.  Heroin addicts seem to be relying on the antidote and are fearing the possible outcome to overdosing less and less.

All industries and business sectors are impacted by this epidemic by lost employees and workplace disruption. Businesses are victimized by theft, violent robberies and murders at the hands of those very same addicts.  There is no escaping; we are all effected and it will take all of us working together to eradicate the crisis and save our neighbors from anguish and fear for their loved ones.

Demetriou is CEO of the award winning Lorraine Gregory Communications company. He is a nationally published author and regularly contributes to LIBN, the Huffington Post and other busi-ness publications. He can be reached at [email protected]