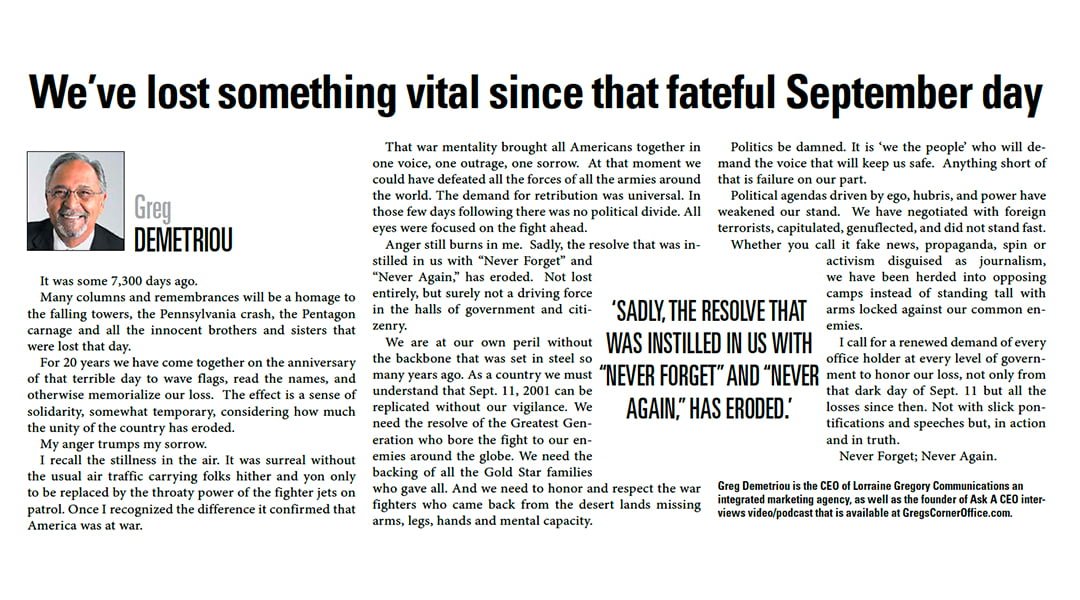 We’ve lost something vital since that fateful September day

Many columns and remembrances will be a homage to the falling towers, the Pennsylvania crash, the Pentagon carnage and all the innocent brothers and sisters that were lost that day.

For 20 years we have come together on the anniversary of that terrible day to wave flags, read the names, and otherwise memorialize our loss. The effect is a sense of solidarity, somewhat temporary, considering how much the unity of the country has eroded.

My anger trumps my sorrow.

I recall the stillness in the air. It was surreal without the usual air traffic carrying folks hither and yon only to be replaced by the throaty power of the fighter jets on patrol. Once I recognized the difference it confirmed that America was at war.

That war mentality brought all Americans together in one voice, one outrage, one sorrow. At that moment we could have defeated all the forces of all the armies around the world. The demand for retribution was universal. In those few days following there was no political divide. All eyes were focused on the fight ahead.

Anger still burns in me. Sadly, the resolve that was instilled in us with “Never Forget” and “Never Again,” has eroded. Not lost entirely, but surely not a driving force in the halls of government and citizenry.

We are at our own peril without the backbone that was set in steel so many years ago. As a country we must understand that Sept. 11, 2001 can be replicated without our vigilance. We need the resolve of the Greatest Generation who bore the fight to our enemies around the globe. We need the backing of all the Gold Star families who gave all. And we need to honor and respect the war fighters who came back from the desert lands missing arms, legs, hands and mental capacity.

Politics be damned. It is ‘we the people’ who will demand the voice that will keep us safe. Anything short of that is failure on our part.

Political agendas driven by ego, hubris, and power have weakened our stand. We have negotiated with foreign terrorists, capitulated, genuflected, and did not stand fast.

Whether you call it fake news, propaganda, spin or activism disguised as journalism, we have been herded into opposing camps instead of standing tall with arms locked against our common enemies.

I call for a renewed demand of every office holder at every level of government to honor our loss, not only from that dark day of Sept. 11 but all the losses since then. Not with slick pontifications and speeches but, in action and in truth.

The author, Greg Demetriou is the CEO of Lorraine Gregory Communications, the founder of GregsCornerOffice.com and the host of the Ask A CEO video and podcast show. He can be reached at [email protected]To learn more about Greg, read Greg's full bio page.