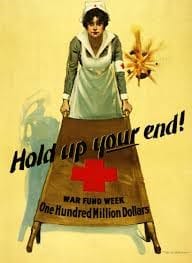 Business as usual. What the hell does that mean during what is quickly becoming a coast to coast social interaction disruption and economic shutdown.

Call it social distancing, self-isolation or quarantine it really doesn’t make a whole lot of difference. We are fighting something that is almost beyond our comprehension. A virus that if it went unchecked could wipe out millions.

The battle is reminiscent of the great war efforts that the United States and the world have mounted before. World War II saw the country mobilize and focus all efforts on the fight at hand. The citizens were asked to buy War Bonds, manufacturers of every stripe ramped up production of the implements of war or converted their equipment to produce everything from soup to socks to helmets to support the troops. Men and women stepped up and joined the ranks of those on the frontlines. Are we much different today?

The story is yet to be written on how effective we are in this fight, but the chapters are already taking shape. A new chapter will undoubtedly be the dissemination of a thriving economy and how it will be saved.

The government, to shore up the country’s citizens and families, has taken unprecedented steps to create a financial safety net. Passing relief bills in the trillions, heretofore unheard of.

People who have been laid off or lost their jobs completely will receive cash payments meant to tide them over until the crisis passes. Many types of concessions on taxes and payments have been formulated and activated. Banking and credit institutions are declaring mortgage and credit debt holidays and accommodations.

Businesses are severely impacted as commerce becomes a trickle of what it was just weeks ago. Non-essential businesses were required to send their employees home. Working remotely has become the norm for those that can. Many thousands and millions of workers are now unemployed or at best working reduced hours. Claims for unemployment benefits are in the millions. A survey of business owners by the New York Times revealed that four out of ten owners feared their businesses would become insolvent and not survive if the economy did not return and return soon.

Many of these companies are fighting for survival. Credit lines and personal savings are being used to hold on in the short term. The hope is that the financial support the government has passed will arrive in time. Owners are cautious about relying too heavily on the rhetoric coming out of Washington and the state houses. All the talk in the world does not put people to work or cash back into the businesses. The longer it takes to distribute the promised relief funds the more businesses will not make it. It will simply come too late.

A look at the restaurants and bars is frightening.  They are notorious for being short on cash flow and on average can weather about a two month interruption of business.  In a defensive action they have resorted to offering “take out” or delivery, but that doesn’t come close to seating people at the empty tables.  Follow that thread and you see the bartenders, waiters, waitresses and bussers all side lined and gaining little or no income.

Manufacturers have been forced to shutter unless they have been designated as essential. Whole industries are clambering that they too should be considered essential. For some, it is a very hollow argument. Some manufacturers, as seen in World War II, have either been asked or voluntarily began producing the critical items needed to fight the virus; namely hand sanitizers, N95 masks, Personal Protective Equipment, and of course ventilators.

Big Pharma, previously cast as a villain, is now the hope of the nation. They are working at breakneck speed to test, approve and produce drugs and therapies that are lifesaving. The FDA has removed as many obstacles and regulations that it can to facilitate progress. Government programs are being formulated that will take the risk out of producing new effective drugs prior to full approval, so they are ready to go as soon as the green light shines.

There is a whole of government effort taking place right beside a whole of the country support. People are taking this fight seriously and doing their part by following the restrictions and guidelines religiously. A common goal is defeating the pandemic within our shores, stemming the progress globally and supporting our fellow man.

The soul of the country is strong, even with houses of worship closed. Every day stories are being told about individuals and companies reaching out to help those on the front lines. Food deliveries are being sent to hospitals, firehouses, police precincts and ambulance corps. Gowns, gloves and masks are being donated in the millions. Prayers are being offered in abundance that God will bless us with a victory.

The greatest generation gave us the road map for this fight. To a large extent this enemy is aimed at the remaining war fighters from years gone by. It is up to us to honor their heritage and fight just as valiantly.