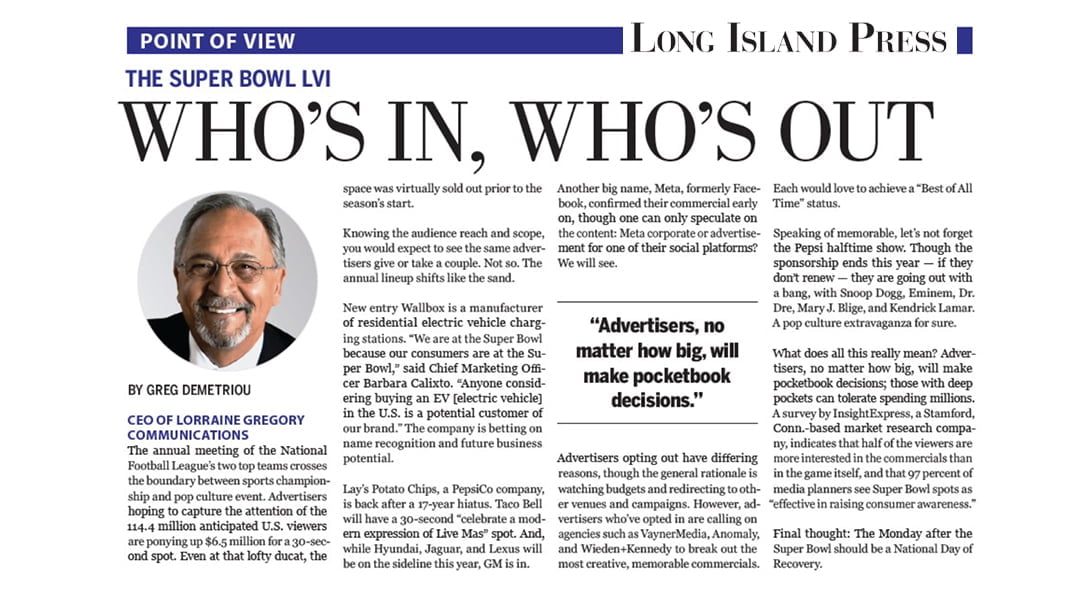 The Super Bowl LVI. Who’s in, who’s out

The annual meeting of the NFL’s two top teams crosses the boundary between sports championship and pop culture event.  Advertisers hoping to capture the attention of the 114.4 million anticipated U.S. viewers are ponying up $6.5 million for a 30-second spot.  Even at that lofty ducat, the space was virtually sold out prior to the seasons’ start.

Knowing the audience reach and scope, you would expect to see the same advertisers give or take a couple.  Not so.  The annual line-up shifts like the sand.

New entry Wallbox is a manufacturer of residential electric vehicle charging stations. “We are at the Super Bowl because our consumers are at the Super Bowl,” said CMO Barbara Calixto. “Anyone considering buying an EV in the U.S. is a potential customer of our brand.”  The company is betting on the name recognition and future business potential.

Lay’s Potato Chips, a Pepsico company, is back after a 17-year hiatus.  Taco Bell will have a 30-second “celebrate a modern expression of Live Mas” spot.  And, while Hyundai, Jaguar, and Lexus will be on the sideline this year, GM is in.

Another big name, Meta, formerly Facebook, confirmed their commercial early on, though, one can only speculate the content: Meta corporate or advertisement for one of their social platforms.  We will see.

Advertisers opting out have differing reasons, though the general rationale is watching budgets and redirecting to other venues and campaigns. However, advertisers who’ve opted in are calling on agencies such as Vayner Media, Anomaly, and Wieden+Kennedy to break out the most creative, memorable commercials.  Each would love to achieve a “Best of All Time” status.

Speaking of memorable, let’s not forget the Pepsi halftime show.  Though the sponsorship ends this year—if they don’t renew—they are going out with a bang: Snoop Dogg, Eminem, Dr. Dre, Mary J. Blige, and Kendrick Lamar.  A pop culture extravaganza for sure.

What does all this really mean?  Advertisers, no matter how big, will make pocketbook decisions, those with deep pockets can tolerate spending millions.  A survey by InsightExpress, a Stamford, Conn.-based market research company, indicates that half of the viewers are more interested in the commercials than in the game itself, and that 97 percent of media planners see Super Bowl spots as “effective in raising consumer awareness.”

Final thought.  The Monday after Superbowl should be a ‘National Day of Recovery.’