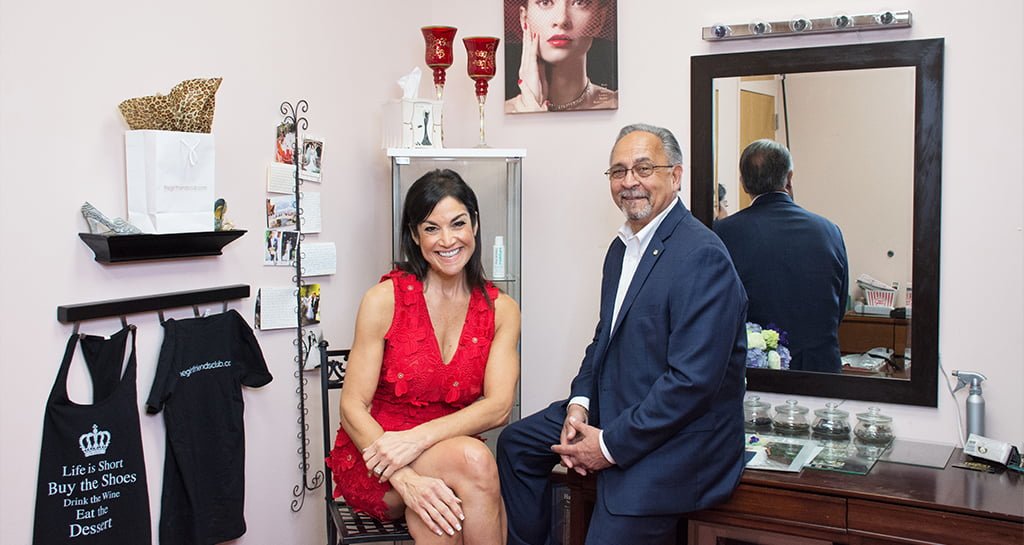 It’s where people are connecting, even bonding, with folks they may never meet face-to-face.

The strength of friendship has always been important to Jabbour. It’s what got her through a trying divorce, financial ruin, and grief, having lost her father, sister and mother, all within a span of three years.

“There was so much strife – if it were not for the help of girlfriends and sisters, I never would have persevered,” Jabbour said.

And as bad as life seemed at times, Jabbour soldiered on, knowing there were “people with much bigger crises who can get back on feet if they want to.”

A dose of positivity, and a little laughter, would go a long way, she said.

By October 2015, Jabbour found a way to harness good energy with a new Facebook community she called “The Girlfriends Club.”

Jabbour designed it as a “support destination for women. There’s no bashing – just a big hug.”

Her first post was an inspirational quote she’d seen before and liked. It read:

The initial post resonated – and resonated. Less than four years later, the post garnered nearly 18,000 likes. As Jabbour put it, “everyone could relate to it – at least the part about the shoes.”

She began posting daily, and heard from people around the world, who told her “you make me laugh,” and “you make me feel good every morning.” One time Jabbour mistakenly scheduled a post for the afternoon, rather than the morning, and a follower in New Zealand, not seeing Jabbour’s message at the usual time slot, reached out to make sure all was well. The online community continued growing.

Today the Facebook group has more than 25,000 organic followers.

And that puts Jabbour in influencer-status, interacting socially in the group’s community.

“At first, I was doing this as a person, not seeing a business picture,” she said.

But from a social media context, this level of interaction is an important currency, according to Kantar Futures, a consultancy whose focus includes eCommerce strategies.

Consumers “are increasingly interested in ways to enrich time spent with others,” according to “Social Innovation,” a Kantar Futures report. “Brands can deliver this kind of social innovation as a service or benefit alongside high-quality functionality.”

And at a time when a digital world can bring negatives – a lack of engagement, concerns about cybersecurity and diminished trust, as reported by the Pew Research Center – there are also positives. These include the ability to stay connected with family and friends, network, share information and tap into new experiences, according to Pew.

It was the positive aspects of digital communities that Jabbour put her focus.

Jabbour’s background – she is a veteran of marketing and ad sales, and held key positions at The New York Times, Newsday and other key media companies – led her to think entrepreneurially. This was enhanced in her current role as group director at Lorraine Gregory Communications, an integrated marketing and advertising agency in Edgewood.

“Being a business woman, I thought there would be a way to monetize it eventually,” she said of The Girlfriends Club.

“The potential is huge,” he said, pointing to the constant headlines covering women’s empowerment. It’s “a hot topic right now, getting bigger and stronger and more powerful every single day.”

Demetriou invested in The Girlfriends Club, which now has its own website and features a retail component as well as a blog with tips on dating, eating well, fashion and other topics.

“We’re trying to take the community to the next level,” she said.

There’s now a video series on YouTube, in which Jabbour is “creating a conversation you’d have with your girlfriends,” she said.

Some of the topics are weighty, including separation and divorce.

Already affiliates that want to expand their marketing reach are partnering with The Girlfriends Club.  And Jabbour and Demetriou are considering eventual paid subscriptions as they develop further content.

But Jabbour is remaining true to her purpose, and that remains building a supportive community.

“I am a business woman,” she said. “I have a career. I’m divorced, and have children. There was no sugar daddy.”

Jabbour said she would never forget the support from her girlfriends, sisters and parents during some of the darkest moments. It’s her time now to pay it forward.

“I’ve been there,” she said. “I remember when it was really hard.”