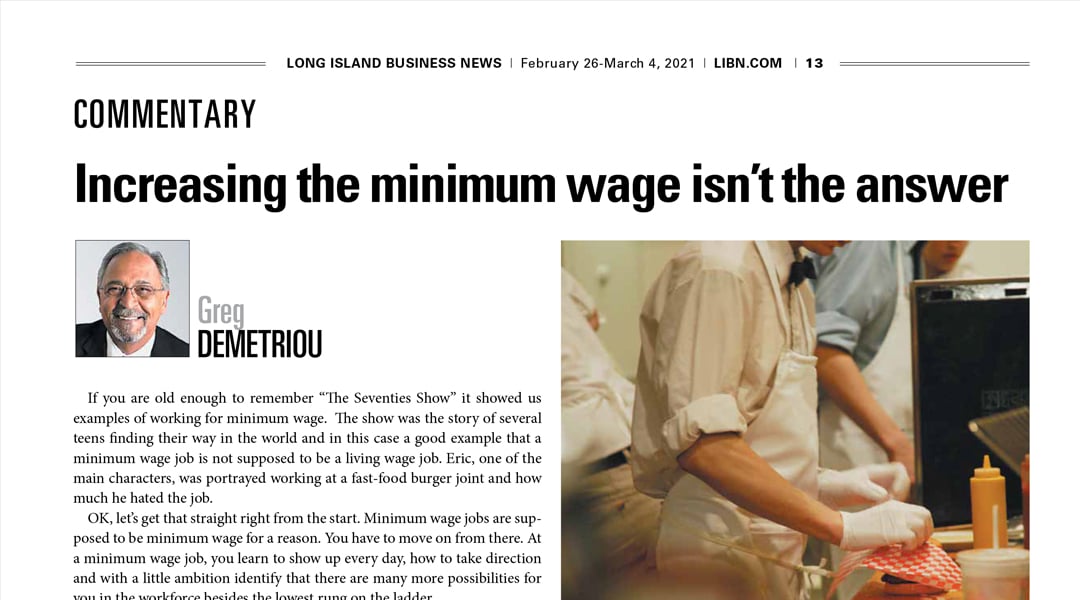 If you are old enough to remember “That Seventies Show” it showed us examples of working for minimum wage. The show was the story of several teens finding their way in the world, and in this case, a good example that a minimum wage job is not supposed to be a living wage job. Eric, one of the main characters, was portrayed working at a fast-food burger joint and how much he hated his job.

Ok, let’s get that straight right from the start. Minimum wage jobs are supposed to be minimum wage for a reason. You have to move on from there. At a minimum wage job, you learn to show up every day, how to take direction, and with a little ambition identify that there are many more possibilities for you in the workforce besides the lowest rung on the ladder.

The vast majority of people in the workforce today had their starts at such positions, either out of necessity, or working for pocket money while attending school or otherwise. I know I did, at a family business owned by my cousins. As a teenager I worked six days a week, eight-hours a day cleaning up in their store and took home a grand total of $50. I had to give my mother thirty of those dollars. All of these jobs, whether in a hamburger joint, department store, local pharmacy or hundreds of other similar places, are meant to be filled by the young and virtually unskilled. They are jobs for those just passing through, performing menial tasks that barely require a pulse to complete. Menial and minimum go hand in hand.

Ambition, initiative, training and education are all escape mechanisms from the minimum wage job. Those attributes are taught at home or self-generated. Laziness, lack of drive and failure to aspire to better yourself, are the handcuffs that bind people into those positions.

I know I am going to be lambasted for being heartless and lacking compassion. Nothing could be further from the truth. I am being instructive. It is up to the individual to break the bonds of their own situations. In the past I have experienced being out of work. I have also experienced having a low-paying job and only having change in my pocket on the day before payday. I had a choice, continue in that vein or take a different course. If I wanted to progress, I had to find an avenue. To list a few of the stop gap minimum wage jobs I held along the way – gas station attendant, night watchman in an apartment building, data entry clerk and delivery van driver. I was happy to have those jobs at the time because I needed to survive. But what I didn’t need was to perpetuate having to work those jobs.

Not everyone can strike out on their own armed with a defined plan and encounter success. Nor can everyone attend college to get a degree. However, the avenues available to success are too many to list. Even in the more urban or depressed areas, there are resources available; public and private educational opportunities and skill training are often provided by the government and/or the hundreds of not-for-profit organizations that willingly fill the gaps.

To reward a person who is working for minimum wage by artificially inflating the salary is a disincentive to self-improvement. The argument is not with the business owners. The weakness of the argument is the aspect of entitlement. Hasn’t the prevalent entitlement psychology already created a welfare culture in so many areas? People have been protected for so long by the government that they virtually have no understanding or desire to break out of the cycle of poverty because there is no incentive. Staying home and collecting is far easier than going off to work. No matter the pay scale.

What happens when you wander down a dead-end road? You turn around and go another way. It is a simple as that.