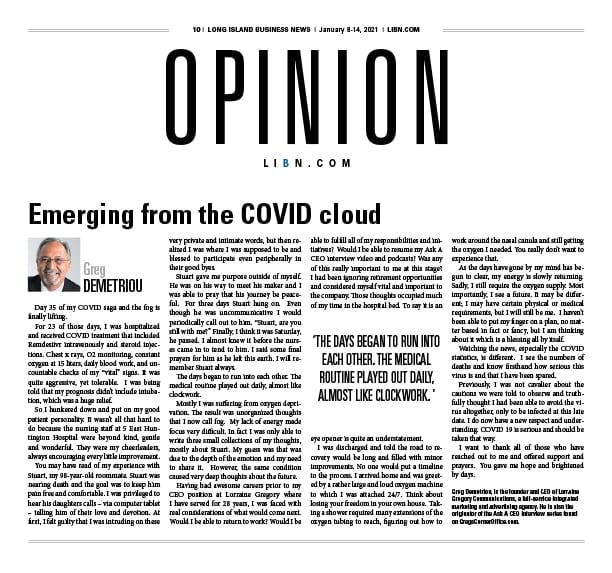 EMERGING FROM THE COVID CLOUD

Day 35 of my COVID saga and the fog is finally lifting.

For 23 of those days, I was hospitalized and received COVID treatment that included Remdesivir intravenously and steroid injections. Chest x rays, O2 monitoring, constant oxygen at 15 liters, daily blood work, and uncountable checks of my “vital” signs. It was quite aggressive, yet tolerable. I was being told that my prognosis didn’t include intubation, which was a huge relief.

So, I hunkered down and put on my good patient personality. It wasn’t all that hard to do because the nursing staff at 5 East Huntington Hospital were beyond kind, gentle and wonderful. They were my cheerleaders, always encouraging every little improvement.

You may have read of my experience with Stuart, my 98-year-old roommate. Stuart was nearing death and the goal was to keep him pain free and comfortable. I was privileged to hear his daughters calls – via computer tablet – telling him of their love and devotion. At first, I felt guilty that I was intruding on these very private and intimate words, but then realized I was where I was supposed to be and blessed to participate even peripherally in their goodbyes.

Stuart gave me purpose outside of myself. He was on his way to meet his maker and I was able to pray that his journey be peaceful. For three days Stuart hung on. Even though he was uncommunicative I would periodically call out to him. “Stuart, are you still with me?” Finally, I think it was Saturday, he passed. I almost knew it before the nurses came in to tend to him. I said some final prayers for him as he left this earth. I will remember Stuart always.

The days began to run into each other. The medical routine played out daily, almost like clockwork.

Mostly I was suffering from oxygen deprivation. The result was unorganized thoughts that I now call fog. My lack of energy made focus very difficult. In fact, I was only able to write three small collections of my thoughts, mostly about Stuart. My guess was that was due to the depth of the emotion and my need to share it. However, the same condition caused very deep thoughts about the future.

Having had awesome careers prior to my CEO position at Lorraine Gregory where I have served for 28 years, I was faced with real considerations of what would come next. Would I be able to return to work? Would I be able to fulfill all of my responsibilities and initiatives? Would I be able to resume my Ask A CEO interview video and podcasts? Was any of this really important to me at this stage? I had been ignoring retirement opportunities and considered myself vital and important to the company. Those thoughts occupied much of my time in the hospital bed. To say it is an eye-opener is quite an understatement.

I was discharged and told the road to recovery would be long and filled with minor improvements. No one would put a timeline to the process. I arrived home and was greeted by a rather large and loud oxygen machine to which I was attached 24/7. Think about losing your freedom in your own house. Taking a shower required many extensions of the oxygen tubing to reach, figuring out how to work around the nasal canula and still getting the oxygen I needed. You really don’t want to experience that.

As the days have gone by my mind has begun to clear, my energy is slowly returning. Sadly, I still require the oxygen supply. Most importantly, I see a future. It may be different; I may have certain physical or medical requirements, but I will still be me. I haven’t been able to put my finger on a plan, no matter based in fact or fancy, but I am thinking about it which is a blessing all by itself.

Watching the news, especially the COVID statistics is different. I see the numbers of deaths and know firsthand how serious this virus is and that I have been spared.

Previously, I was not cavalier about the cautions we were told to observe and truthfully thought I had been able to avoid the virus altogether, only to be infected at this late date. I do now have a new respect and understanding. COVID 19 is serious and should be taken that way.

I want to thank all of those who have reached out to me and offered support and prayers. You gave me hope and brightened my days.