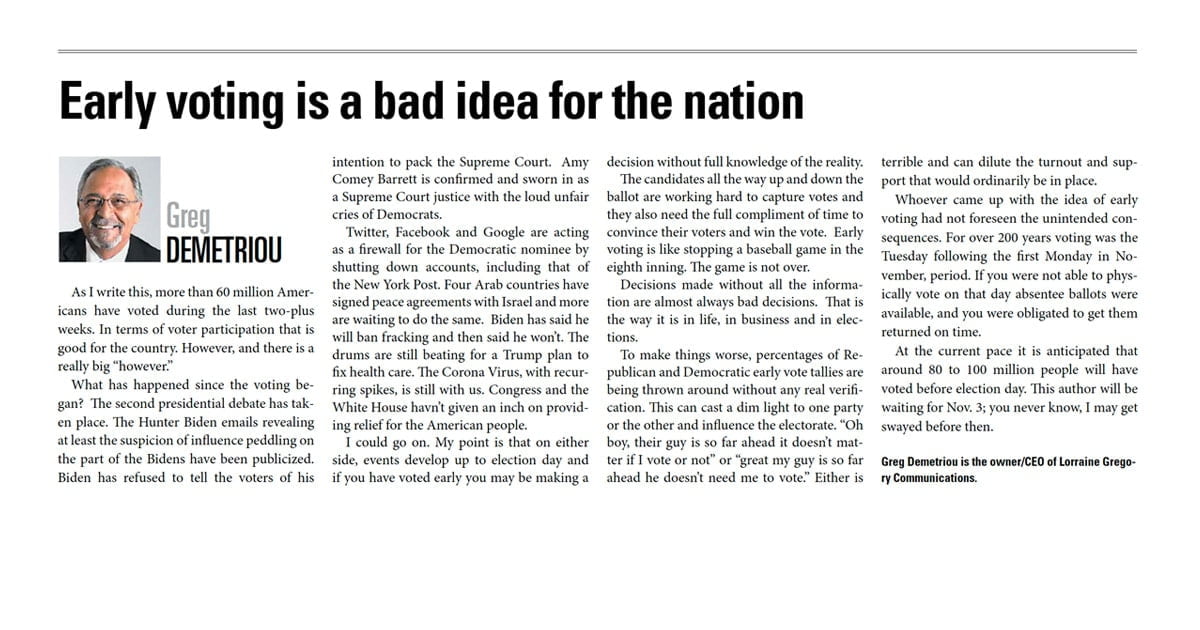 Early voting is a bad idea for the nation

As I write this, more than 60 million Americans have voted during the last two-plus weeks. In terms of voter participation that is good for the country. However, and there is a really big “however.”

What has happened since the voting began?  The second presidential debate has taken place. The Hunter Biden emails revealing at least the suspicion of influence peddling on the part of the Bidens have been publicized. Biden has refused to tell the voters of his intention to pack the Supreme Court.  Amy Comey Barrett is confirmed and sworn in as a Supreme Court justice with the loud unfair cries of Democrats.

Twitter, Facebook and Google are acting as a firewall for the Democratic nominee by shutting down accounts, including that of the New York Post. Four Arab countries have signed peace agreements with Israel and more are waiting to do the same.  Biden has said he will ban fracking and then said he won’t. The drums are still beating for a Trump plan to fix health care. The Corona Virus, with recur-ring spikes, is still with us. Congress and the White House havn’t given an inch on providing relief for the American people.

I could go on. My point is that on either side, events develop up to election day and if you have voted early you may be making a decision without full knowledge of the reality.

The candidates all the way up and down the ballot are working hard to capture votes and they also need the full compliment of time to convince their voters and win the vote.  Early voting is like stopping a baseball game in the eighth inning. The game is not over.

Decisions made without all the information are almost always bad decisions.  That is the way it is in life, in business and in elections.

To make things worse, percentages of Re-publican and Democratic early vote tallies are being thrown around without any real verification. This can cast a dim light to one party or the other and influence the electorate. “Oh boy, their guy is so far ahead it doesn’t matter if I vote or not” or “great my guy is so far ahead he doesn’t need me to vote.” Either is terrible and can dilute the turnout and support that would ordinarily be in place.

Whoever came up with the idea of early voting had not foreseen the unintended consequences. For over 200 years voting was the Tuesday following the first Monday in November, period. If you were not able to physically vote on that day absentee ballots were available, and you were obligated to get them returned on time.

At the current pace it is anticipated that around 80 to 100 million people will have voted before election day. This author will be waiting for Nov. 3; you never know, I may get swayed before then.